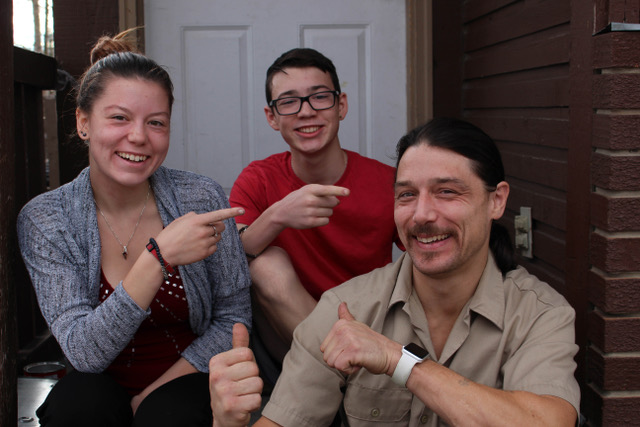 Jamie Martin couldn’t be prouder of the two kids he gave up during his years of drug addiction, and who he had the good fortune to reconnect with after he worked through the Calgary Drug Treatment Court.

“These are two amazing human beings,” he says, nodding to Justice, 16 and her brother AJ, 15.  “They were adopted by a great aunt and uncle, home schooled and now stay with us on weekends.”

The three of them talk about their plans for Christmas when gifts will pile around the Christmas tree, waist deep, spilling from the living room into the kitchen.

Do the kids get everything they wish for? “Pretty much,” says Justice, smiling.

Jamie and his wife Patricia share seven children in one big, blended family.  Their youngest is Jacob, 16 months, their first child together.

A life of family and connection continually amazes Jamie, 36. Like many drug addicts, Jamie had a difficult childhood, growing up with alcoholism. He started drinking and using drugs as a teenager, eventually getting kicked out of home at 15 years of age.  “The only thing I didn’t do was stick a needle in my arm,” he recalls of his use of cocaine, LSD, meth and mushrooms.

Panhandling led to petty crime, breaking into cars, newspaper boxes and laundry machines.  As he used harder drugs, he became homeless and bounced in and out of jail. By his early 20s, Jamie was the father of two children.

“Lots of things got destroyed,” he says of that period.  Domestic disputes spiraled and Jamie lost his two kids and their mother.  Having given up on life, he was ‘rescued’ after his final arrest, October 17, 2011.  He knew something had to change. He asked his lawyer if he could be accepted into the Calgary Drug Treatment Court. He filled out a form, and was stopped by the question, “what is your reason for wanting to join the Calgary Drug Treatment Court?”

“I had two very clear reasons,” says Jamie.  “I wanted to be a better person. And I wanted to be a part of my kids’ lives. I hadn’t seen my kids in years. Life just slapped me in the face. It was time to buckle down.” 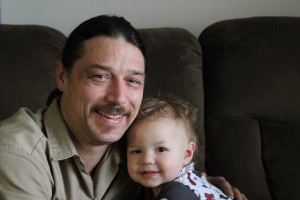 Jamie was accepted into Simon House. His partner in sobriety was Kerry G, and together they attended several meetings a day focused on staying sober. Jamie stayed an extra year there, “making sure I was there for others, sponsoring newcomers and giving back.”

He graduated from the Calgary Drug Treatment Court in 2013 and credits the rigor and thoroughness of the program for getting his kids back, his subsequent marriage and becoming a new father again.  For four years, Jamie has worked in asbestos removal, supervising five workers and driving a company truck.

This Christmas, he expects all his kids will squeeze in around the tree and the mountain of gifts. He’ll be cooking turkey for dozens of extended family members. Jamie is living his dream – a never-ending gratitude for a life of purpose and connection.