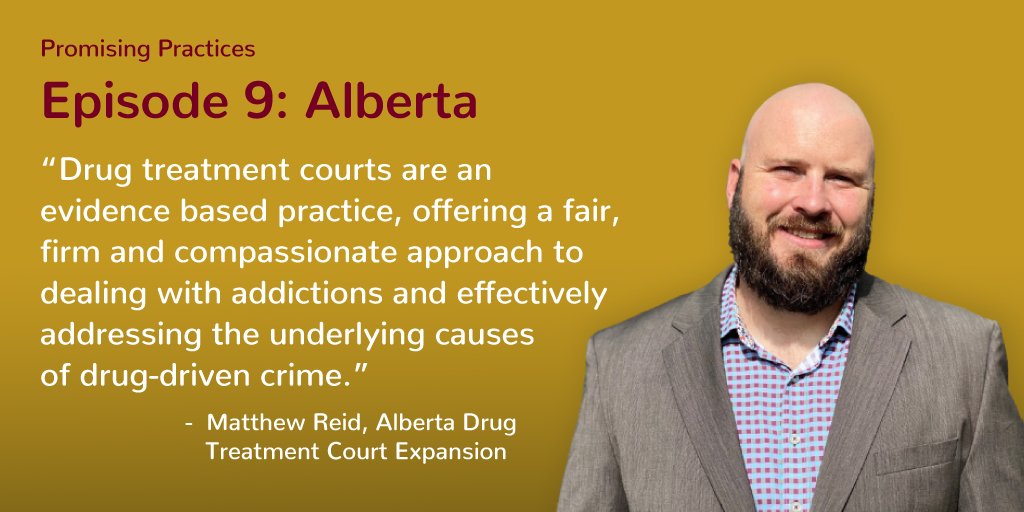 Alberta’s person-centred approach addresses more than an individual’s mental health and addiction challenges. It’s about improving their quality of life by supporting balance and healing in all aspects of their health and wellness. The Alberta model is based on successful practices seen around the world.

The Promising Practices podcast is an initiative of Canada’s Premiers. The aim is to share promising practices that are underway in each province and territory with respect to mental health and addictions.

Learn more about Alberta’s vision for addiction and mental health care, as well as some key initiatives the province is undertaking to support those who need this care. We are also going to hear from some individuals on the front lines who deliver those services…and an individual in recovery from addiction who has accessed those services for himself, and who now helps others on their journey to recovery.

Matthew Reid: Hello. My name is Matthew Reid and for the last year I’ve been working on the Government of Alberta’s Drug Treatment Courts Program as the director of the courts expansion. As a former probation officer involved in the Calgary drug treatment court, I’ve seen the impact drug addiction has on individuals, families and communities, and the associated cost of the crime that stems from addiction. I’ve also seen the positive impact drug treatment courts can have on participants and the opportunity for healing and reconciliation that the programs offer.

Drug treatment courts are an evidence-based practice offering a fair, firm and compassionate approach to dealing with addictions and effectively addressing the underlying causes of drug-driven crime. Internationally, drug treatment courts are established and fixed entities following set standards and principles in their operation, which have been proven effective for over 30 years. They use a non-adversarial court process to hold participants accountable for their criminal behavior, as well as providing individualized drug treatment programming.

These multi-disciplinary courts involve judges, federal and provincial prosecution services, court services, probation, police, legal aid, duty counsel, and community treatment and service providers. Drug treatment courts help offenders break the cycle of criminal behavior driven by their drug addiction through drug treatment programming and behavioral interventions. Participants facing serious jail time for drug-driven offenses are provided a chance to avoid a jail sentence by completing this program. They’re held accountable through judicial supervision, frequent and random drug testing, and the use of sanctions and rewards. Participants are supported by a team of professionals including addiction, mental health and corrections professionals who tailor treatment programs and interventions to participant needs.

The program’s success lies in its ability to address addiction and criminal behavior as separate yet connected issues. When drug treatment courts follow the established principles and standards, their ability to address the factors that lead to addiction and repeat criminal behavior is quite high. In Alberta, our first drug treatment courts started in 2005 in Edmonton, and the second one opened in Calgary in 2007. Both courts adhere closely to these principles and best practices and are considered the gold standard. Since their inception, they reported that 70% of their graduates remained crime free after program completion. In general, drug treatment court participants report decreased levels of addiction risk, whether they graduate the program or not. And those who don’t graduate leave the program at lower risk to fall back into addiction and reoffend.

These drug treatment courts will become a part of the provincial recovery-oriented system of care that the Government of Alberta is transitioning to. In 2019, the Government of Alberta committed $20 million over four years to create Canada’s first Provincial Drug Treatment Court Program that is based on consistent standards and principles. The program expands drug treatment court services in a planned and systematic way, and is opening five new drug treatment courts to serve rural and remote communities outside of Edmonton and Calgary and provides funding and support to ensure that they operate effectively.

This provincial project requires substantial work from the drug treatment court stakeholders, and we’re grateful for the outstanding support we’ve received so far from our judiciary, Public Prosecution Services of Canada, Legal Aid Alberta, Justice and Solicitor General ministry, Mental Health and Addictions ministry and Alberta Health Services. Local communities have been very supportive as well, and we’ve had great interest from city councils, community groups and local addictions and justice agencies. Their support is vital to the expansion and continuing success of the drug treatment courts, and the participants, and to keeping our communities safe and improving the lives of Albertans.